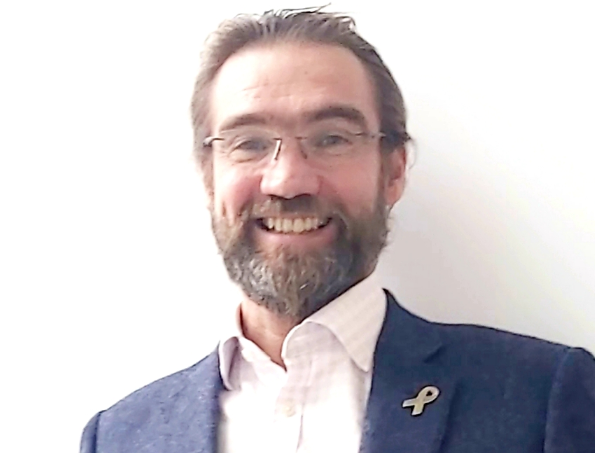 He is committed to leading innovative changes in treatments and redesigning models of cancer care across cancer systems, especially relating to systemic anti-cancer therapies.

Professor Wardley has led breast cancer research in Manchester for 20 years and is a leader in national and international trials, many of which have led to major advances in breast cancer outcomes for patients. He has led implementation of many of these advances into services developments through commissioning initiatives locally and nationally, and contributed to international breast cancer guidelines.

Receiving his primary (MB.ChB.1989) and research degrees (MSc. & MD. 2000) from the University of Manchester, UK, and completing general & higher medical training in 1993 and 2000,respectively. His oncology training in Manchester and Leeds, included haematological oncology, inspiring him to the idea of research opportunity and access for all breast cancer patients-“a question to answer for every person”.

In 2020, he was appointed Chair of the National Cancer Research Institute (NCRI) Breast Research Group. He leads initiatives to ensure international guidelines for primary medical therapy are adopted in UK including response directed therapy.

Professor Wardley is passionate about improving quality of and access to care for cancer patients and recognises the need for an integrated system approach to delivery oncology services. His drive and his clinical entrepreneurial leadership has led to Professor Wardley to be a catalyst for reform in oncology business services nationally and internationally, with special attention to health inequalities.

Professor Wardley’s model of care has been incorporated into the European Code of Cancer Practice and services innovations in NHS England. Various challenges to advancing his model of care within NHS led to the founding of Outreach Research & Innovation Group Limited in March 2020. Outreach Research & Innovation Group is a leading healthcare business service provider aimed at reducing health inequalities through service redesign and development and access to research.

We use cookies on our website to give you the most relevant experience by remembering your preferences and repeat visits. By clicking “Accept All”, you consent to the use of ALL the cookies. However, you may visit "Cookie Settings" to provide a controlled consent.
Cookie SettingsAccept All
Manage consent

This website uses cookies to improve your experience while you navigate through the website. Out of these, the cookies that are categorized as necessary are stored on your browser as they are essential for the working of basic functionalities of the website. We also use third-party cookies that help us analyze and understand how you use this website. These cookies will be stored in your browser only with your consent. You also have the option to opt-out of these cookies. But opting out of some of these cookies may affect your browsing experience.
Necessary Always Enabled
Necessary cookies are absolutely essential for the website to function properly. These cookies ensure basic functionalities and security features of the website, anonymously.
Functional
Functional cookies help to perform certain functionalities like sharing the content of the website on social media platforms, collect feedbacks, and other third-party features.
Performance
Performance cookies are used to understand and analyze the key performance indexes of the website which helps in delivering a better user experience for the visitors.
Analytics
Analytical cookies are used to understand how visitors interact with the website. These cookies help provide information on metrics the number of visitors, bounce rate, traffic source, etc.
Advertisement
Advertisement cookies are used to provide visitors with relevant ads and marketing campaigns. These cookies track visitors across websites and collect information to provide customized ads.
Others
Other uncategorized cookies are those that are being analyzed and have not been classified into a category as yet.
SAVE & ACCEPT